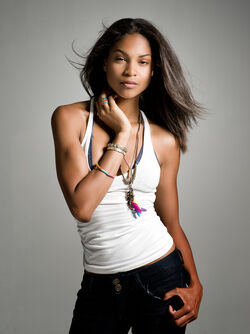 Aeriel Miranda is a native of Dallas, Texas who has family roots in Boston, Massachusetts and Los Angeles, California. Growing up in Dallas, visiting relatives throughout her life in Boston, she officially made Los Angeles her home in 2007. Aeriél often has to explain her ethnicity; one being rooted in West African, Portuguese, French, German and Jewish which is Cape Verdean. She currently portrays Shana on Pretty Little Liars.

Currently, she is a member of the Commercial and Print Modeling World. Her national and international include companies such as Jc Penny, Apple Inc, Sony and Bed Head to name a few. In addition, from having a guest appearance on the Dr. Phil show to speak on universal issues surrounding teenagers, most would recognize her from Endurance, a television show that aired on The Discovery Kids Channel. Her most recent role was on "The Nine Lives of Chloe King" on ABC Family as she played the dynamic and sassy Miss Lana Jaccobs.

Retrieved from "https://the-tomorrow-people.fandom.com/wiki/Aeriel_Miranda?oldid=13597"
Community content is available under CC-BY-SA unless otherwise noted.