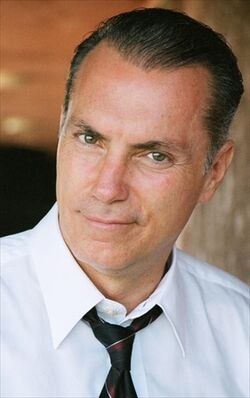 Al Sapienza (born July 31, 1962) is an American actor, who has had numerous roles in television, stage and film productions. He is most well known for his role as Mikey Palmice on the HBO series The Sopranos as well as Marty Spinella, a lobbyist for the teachers' union in the Netflix series House of Cards. He played the role of Dr. Jake Housman in the North American premiere of the stage version of Dirty Dancing.

Sapienza was born in New York City, New York, the son of Angela Louise Caldi and Joseph Richard Sapienza. His four grandparents all originated from different regions of Italy. He is the youngest among his four siblings. He graduated with a B.S. from New York University in 1986.

Retrieved from "https://the-tomorrow-people.fandom.com/wiki/Al_Sapienza?oldid=9314"
Community content is available under CC-BY-SA unless otherwise noted.