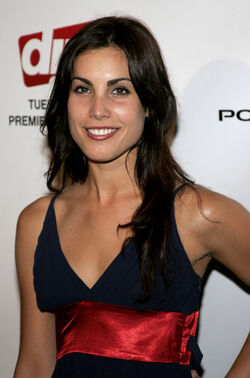 Pope portrayed Morgan Burke, Jedikiah's girlfriend and also one of the Tomorrow People.

Pope was born and raised in Vancouver, British Columbia, with an older brother, Kris, also an actor, and a younger brother, Alexander. She began acting during her high school years in Vancouver where she appeared in stage classics such as The Odd Couple, playing Mickey, and A Midsummer Night's Dream, playing Titania. She attended high school at Lord Byng Secondary School near the University of British Columbia campus, along with classmate Cobie Smulders.

Pope started her career with several small roles, such as Disturbing Behavior, Snow Day, and Night Man, before being cast as Sam McPherson on the WB's high-school drama Popular. After the show ended, Pope had several roles in film and television, including The Glass House, Jeff Probst's Finder's Fee, and Orange County. In 2004 she had starred as Maya Kandinski in The Collector. In 2005 she was a guest-star in an episode of FOX's Tru Calling and played an aspiring social worker in the film Eighteen. In 2007, Pope starred in the Power Up project Itty Bitty Titty Committee, and in Martin Gero's ' intelligent sex comedy ' and Toronto International Film Festival hit, Young People Fucking. In 2009, she appeared in FOX's hit thriller, 24, as Samantha Roth, the president son's girlfriend. Pope joined the main cast of the short lived NBC courtroom drama series Outlaw in 2010.

Splitting her time between Los Angeles and Vancouver Pope is currently attending university when her filming schedule allows. She speaks Italian, Spanish and French fluently and is seeking to expand her education in literature and languages. On December 29, 2009, Pope and her brother, Kris Pope were driving a black BMW down West Georgia Street in Downtown Vancouver when David Fromradas, 31, of Alberta jumped on top of the car and yelled at them to run him over. When Kris got out of the car, Fromradas jumped in the front seat and drove the vehicle into the new CBC studios. Pope suffered a broken rib, and two cracked vertabrae, Kris suffered severe injuries to his ankle along with another victim who was a passerby.

Retrieved from "https://the-tomorrow-people.fandom.com/wiki/Carly_Pope?oldid=18643"
Community content is available under CC-BY-SA unless otherwise noted.