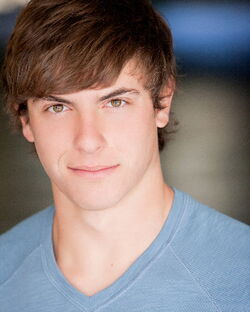 Derek Klena is an American actor. In The Tomorrow People, heportrays Dylan in Pilot.

Derek Klena was born on October 3, 1991, in Los Angeles, California.

He participated at "America's Most Talented Kid" in 2003 and auditioned for "American Idol" in 2010. In the video "Big Guns" of 2006, he had a voice role. He starred at different musicals, for example in the role of Eddie Birdlace in "Dogfight" and as Tommy Ross in "Carrie". in May 2013, he joined the Broadway musical "Wicked" in the role of Fiyero.[1]

Derek Klena was also a baseball star at college.

Baseball
Add a photo to this gallery

Retrieved from "https://the-tomorrow-people.fandom.com/wiki/Derek_Klena?oldid=18500"
Community content is available under CC-BY-SA unless otherwise noted.