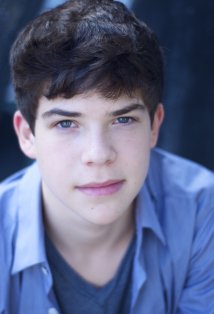 Jacob Kogan  is an American actor. He is best known for playing the title role in the 2007 psychological thriller Joshua and Spock as a child in J.J. Abrams' Star Trek.

He portrays Luca Jameson, the younger brother of Stephen Jameson.

Kogan was born in New York City, where he lives and attends a private school for the arts. He is the son of author and photographer Deborah Copaken Kogan and Russian-born one-time child actor Paul Mikhailovich Kogan. He also has two younger siblings, Sasha and Leo. Before starring in Joshua, Kogan was a regular on the adult-oriented MTV2 sketch comedy television series, Wonder Showzen. He wrapped production on a film called Lifelines, from writer/director Rob Margolies. The film had a general release on April 3, 2009 at the Quad Theater in Manhattan after having been shown at film festivals in 2008. Kogan also starred in the television series Delocated. He had a guest star part on Law and Order: SVU in 2011 in the episode "Blood Brothers", playing Tripp Raines. He will play Luca in the CW's "The Tomorrow People". Kogan was the former lead singer/guitarist in the band Flake Plays, which released a self-titled EP in 2008.

Retrieved from "https://the-tomorrow-people.fandom.com/wiki/Jacob_Kogan?oldid=18301"
Community content is available under CC-BY-SA unless otherwise noted.