Jedikiah "Jed" Price is an evolutionary biologist; he is determined to contain the "threat" of the Tomorrow People, who represent the next stage in human evolution. He is the older brother of Roger Price, the brother-in-law of Marla Jameson, and the uncle of Stephen and Luca Jameson. He is a primary antagonist, former arch-nemesis and sometimes unwilling ally, of The Tomorrow People, though his true agenda of helping humanity appears to be genuine.

He is portrayed by Mark Pellegrino.

Dr. Jedikiah Price, an evolutionary biologist, is the head of a paramilitary group of scientists known as Ultra - though it is later revealed that he reports to a superior, Hugh Bathory. As the leader, Dr. Price sees the Tomorrow People as a very real existential threat from a rival species, and he will do whatever it takes to protect the human race.

Not much is known about Jedikiah's parents or childhood, but we do know that his brother Roger was one of the founding members of the Tomorrow People. The Founder hints that Jedikiah was jealous of his brother's abilities; this is also strongly suggested by flashbacks. In Thanatos, it is also shown that Roger taught Jedikiah tricks about how to resist having his mind read. The fact that they shared this and worked together in later life suggests that they were close in childhood.

In In Too Deep,

In Kill Or Be Killed,

In All Tomorrow's Parties,

In Sorry For Your Loss,

In Enemy of My Enemy,

In Smoke and Mirrors,

In A Sort of Homecoming,

In Kill Switch, he urgently sees the Senator to warn him of the catastrophe that the The Founder is going to create. The Senator thought Jedikiah was going crazy and put him in a shrink. Stephen sends Marla to save him.

Upon returning to the lair, he works with Irene to find out how to disable the tracers. While doing that, Irene proved what Jedikiah could have never done, find out what supplied paranormals their powers. So he injected Irene with something, and took her DNA and injected himself with it. He later goes on a rampage.

In Son of Man,

Jedikiah is very serious about his job, which is the only thing that seems to occupy him at times. He will not deal with disorder or chaos, and will do whatever it takes to make sure he has captured every breakout he can find. However, he seems to have soft spots for certain characters, like Stephen, Morgan and John. Morgan is the only breakout he actively decides not to hunt, aside from Stephen.

Jedikiah is in his late 30s to early 40s, with dark blond hair and icy blue eyes, and is about 6' 1" tall. In the first half of Season 1 he mostly dresses in professional attire, but later in the season he starts dressing a bit more casually.

In Pilot, Jedikiah and John seem to have a very hateful relationship as John refers to him as "That sadistic son of a bitch". Later in the episode Jedikiah shoots at John but the bullet is stopped by Stephen who teleports John and the others out, saving them. In Kill Or Be Killed, it is shown how John and Jedikiah met (Jedikiah "saved" John from an abusive foster home). From then on, Jedikiah basically raised John, and repeatedly calls him "son", though John firmly states, "I'm not your son". It is revealed that Ultra gave John the ability to kill, like Killian, for which John greatly resents Jedikiah. Jed says he is proud of John, but John declares that they are no longer running, and now it's kill or be killed, officially starting their war. In Thanatos, Jedikiah appears to truly care for John, keeping John's biggest secret: John killed Roger Price, Jed's brother and Stephen's father, six years ago. He's been "leading the Tomorrow People on a search for a dead man". In Smoke and Mirrors it's shown that Jedikiah hacked TIM which led John to a place they went alot in their earlier years. In this episode it's shown that despite John not trusting Jedikiah, he is the only person who is willing to help him (Stephen basically told him "Stuff you"). This continues into Modus Vivendi when Jedikiah begs John to help him protect Roger. Also in this episode when John has a gun to a agent who found where they are keeping Roger, despite Jed's constant order to shoot him, John cannot and lets him go. However, Jedikaih and John get Roger safely to the Lair, and later Jedikiah asks John if he can ever forgive him for ordering John to kill Roger. John replies "We'll see", showing that despite everything, there may be hope for John's relationship with Jedikiah. (In Cara's words to Stephen, "John has a soft spot for your uncle").

In Sorry For Your Loss, it is shown that Jedikiah is in a secret relationship with Morgan who is one of The Tomorrow People. He has kept her existence a secret from Ultra in order to protect her.

In Superhero he finds out she is pregnant with his child.

Jedikiah's full name (Jedikiah Price) was a loose derivation of the shows original creator Roger Price, this of course suggests that Jedikiah's brother Roger Price is similarly named after the same man.

In the original series, Jedikiah was an alien shapeshifting robot trying to kidnap and enslave the Tomorrow People. He was the main anthagonist in the first story arc and in the series 3 finale.

Stephen: Our kind can't even kill.
Jedikiah: Yet. But you are one mutation away from acquiring the ability.

Jedikiah: Failure will not be tolerated.

Stephen: You can't kill her.
Jedikiah: I most certainly can.

Jedikiah: The point is, your kind cannot be trusted in our world.
Jedikiah (to John): I made you strong, perfect! 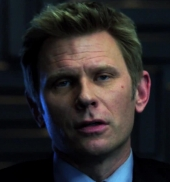 Add a photo to this gallery
Episode Images

Death's Door
Add a photo to this gallery
Retrieved from "https://the-tomorrow-people.fandom.com/wiki/Jedikiah_Price?oldid=18593"
Community content is available under CC-BY-SA unless otherwise noted.