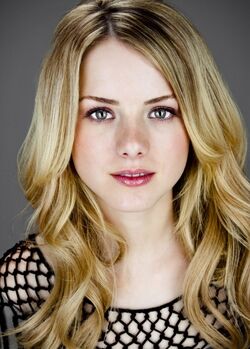 Laura Slade Wiggins is an American television and film actress and a musician.

She has appeared in the productions Dance of the Dead, Eleventh Hour, and in an episode of CSI: Crime Scene Investigation titled "World's End". Wiggins played a pregnant teenager in the an episode of the fourth season of Private Practice called "The Hardest Part" which aired on March 31, 2011. She appeared in the 2011 comedy film Hit List.

In Summer 2010, Wiggins joined the Showtime dramedy Shameless, as Karen Jackson, a series regular. After a successful first season, the show was renewed for a second season, which premiered January 8, 2012. Wiggins remained part of the main cast as a series regular for the first two seasons. For season three, she became a recurring series member.

Retrieved from "https://the-tomorrow-people.fandom.com/wiki/Laura_Slade_Wiggins?oldid=18641"
Community content is available under CC-BY-SA unless otherwise noted.