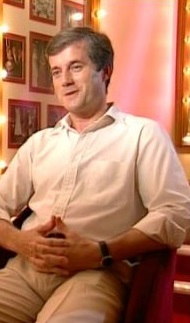 Educated at preparatory school followed by The Corona Stage School, Nicholas Young was already in his early 20s when he auditioned for the role of "John" in "The Tomorrow People" (1973). Prior to landing the role, he appeared in The Children's Film Foundation production Eagle Rock (1964), the little-remembered television series "The Flying Swan"(1965) and "Front Page Story" (1965), "Upstairs, Downstairs" (1971) and a number of one-off television plays including "The Wednesday Play: The Connoisseur (#1.59)" (1966), directed by Waris Hussein (whose credits include the first ever Doctor Who). In addition, while working on The Tomorrow People he featured in the two-part "Space: 1999" (1975) story The Bringers of Wonder (the first broadcast on August 4, 1977) as Peter Rockwell, and, in the same year, played alongside Jon Pertwee (the 3rd incarnation of Doctor Who) as a young gangster called Legs Luigi in the film Adventures of a Private Eye (1977). Young was the only cast member to stay with "The Tomorrow People" (1973) for its entire six year run. After its conclusion in 1979, he appeared in numerous other programs including the series "Kessler" (1981), and Cymbeline (1982) (TV) (part of the BBC Shakespeare series); perhaps more famously he appeared as a Jeremy Beadle stooge in over 40 sketches for "Game for a Laugh" (1981) and "Beadle's About"(1986). More recently, he has worked as a theatrical agent, representing, among others, Philip Gilbert. The two were reunited once again in 2001, as they reprised their roles as John and TIM for the new Tomorrow People audio adventures released by Big Finish Productions.
Retrieved from "https://the-tomorrow-people.fandom.com/wiki/Nicholas_Young?oldid=18652"
Community content is available under CC-BY-SA unless otherwise noted.