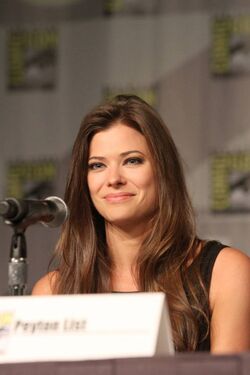 Peyton List is an American actress and model best known for playing Jane Sterling on the AMC TV series Mad Men, Nicole Kirby on the ABC TV series FlashForward, and her early work as Lucy Montgomery on As the World Turns.

List portrays Cara Coburn, a young woman with special powers who is described as both trustworthy and serious.

After the series was cancelled she went on to play Captain Cold's sister in The Flash.

Peyton List was born in Boston, Massachusetts, to Douglas List and wife Sherri Anderson, but grew up in Baltimore, Maryland, with her sister Brittany List. She began her education at Cedarcroft pre-school and Calvert School, and then went to the Roland Park Country School in Baltimore. At the age of eight, she connected with Camera Ready Kids, a children's modeling agency. Her first significant commercial appearance was as one of the "daughters next door" (together with her sister) in Washington Square. She also appeared as a Christmas Caroler in Enemy of the State, also filmed in Baltimore.

Peyton's early modeling successes included television commercials for Kraft Macaroni and Cheese and Little Monkey Lost. At the age of 12, she was invited to attend the School of American Ballet's summer program. Under the tutelage of Ford Kids, Peyton did major campaigns with Limited Too (she appears on the inside cover of Limited Two's IPO), Polo Ralph Lauren, and other advertisers seeking to reach the young teen market. Soon, List was leaving school two or three times a week for modeling assignments. At the age of 15, she signed a three-year contract with As the World Turns playing Lucy Montgomery.

List became connected with Ford Children. She has modeled for Dooney & Bourke as well as Clean & Clear. She has graced the cover of Girls' Life magazine more times than any other model. List has also appeared on covers for Your Prom (2003) and Bridal Guide (2005).

List had a minor role in the HBO television series Sex and the City in 2000. The following year, she played a small part in an episode of Law & Order: Special Victims Unit, and started a three-year run as Lucy Montgomery on As the World Turns.

List left the soap opera early in 2005 and was next seen as Lucy Lane in an episode of the long-running television series Smallville and in the Just Legal pilot. In the same year, she had guest roles, including playing a prostitute in Without a Trace, a rich girl in the CSI: Miami and CSI: NY crossover and Solaris, a 15 year old model, in the CW's One Tree Hill.

In 2006, List appeared as Tally Reida on on NBC's Windfall in multiple episodes. After the series was cancelled during its first season, List moved on to the short-lived Day Break, appearing in 3 episodes as Ava. During the 2007 pilot season, List signed on to ABC's Big Shots, where she played the role of Cameron Collinsworth, daughter of a cosmetics firm CEO played by Dylan McDermott. The series was cancelled mid-season.

List reprised her role as Lucy Lane on the final season of Smallville in the episode titled "Ambush", aired on November 5, 2010.

In early December 2010, List played Erica Harris, a newlywed with amnesia and a survivor of a potential serial killer in CBS' Hawaii Five-0 episode "Palekeiko".