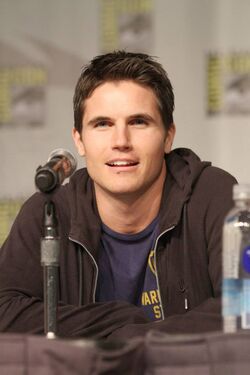 His cousin Stephen Amell portrays Oliver Queen, a.k.a Green Arrow on the television show Arrow. Robbie would later portray Ronnie Raymond aka "Firestorm" in its spinoffs "Flash" and "Legends of Tomorrow".

Amell was born on April 21, 1988 in Toronto, Ontario with his parents' roots in Ireland. Along with his sister, he started modeling and acting in small roles in commercials when he was six years old. He attended Toronto Public Schools and graduated in 2000. At 16, he began landing roles in high school plays such as Louis and Dave and Fionia, Picasso at the Lapin Agile and The Importance of Being Earnest. His love for acting made him go to Canadian Studios Acting Academy. He graduated from Lawrence Park Collegiate Institute in Toronto in 2006. Stephen Amell is his cousin. Interestingly, Stephan played the lead role in the show Arrow, which aired right before The Tomorrow People in the 2013-2014 Tv season on The CW.

Amell first appeared as Daniel Murtaugh in Cheaper by the Dozen 2, which filmed in the Muskoka Region of Ontario. He also appeared in the 2010 horror film Left for Dead. Amell is currently set to star in the comedy film Seeing is Believing playing one of the 3 lead characters, Nick Wright, production for the film began on May 3, 2010 and ended on July 1. The film is set to premiere on January 14, 2011.

Amell had a role in the Canadian Family Channel series Life with Derek, playing lead character Casey McDonald's boyfriend, Max. Life With Derek was distributed worldwide including US Disney Channel and its international affiliates. He has also appeared in the ABC Family film Picture This.

He played the role of Noel Kahn's brother Eric on the ABC Family television series Pretty Little Liars during the show's third season.