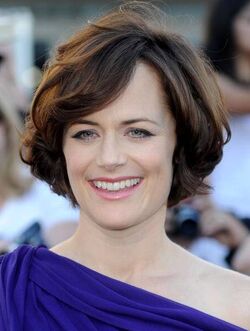 Sarah Clarke (born February 16, 1972) is an American actress, best known for her role as Nina Myers on 24, and also for her roles as Renée Dwyer, Bella Swan's mother, in the 2008 film Twilight, Erin McGuire on the short-lived TV show Trust Me, and CIA Agent Lena Smith on the USA Network show Covert Affairs.

Clarke was born in St. Louis, Missouri, the daughter of Carolyn, a homemaker, and Ernest Clarke, an engineer.

She attended John Burroughs School in St. Louis, Missouri (along with Mad Men star Jon Hamm, who was her prom date), and Indiana University, where she studied Fine Arts and Italian. While a student at IU, Clarke became a member of the Kappa Alpha Theta sorority. She was initiated into the Beta chapter in 1990.

Clarke first became interested in acting while studying abroad during her senior year in Bologna, Italy. Upon returning to the United States, she began studying architectural photography. She received free acting lessons in return for taking photographs of a cultural arts center, and she studied acting at Circle in the Square Theatre School, Axis Theater Company, and The Willow Cabin Theatre Company.

Clarke began her acting career with an appearance in a 1999 award-winning commercial for Volkswagen. She followed this with a role in the 2000 short film Pas de deux and received an Outstanding Performance award at the Brooklyn Film Festival. Clarke's career soon blossomed with minor roles, including films All About George in 2000 and The Accident in 2001, as well as television shows such as Ed and Sex and the City.

In 2001, Clarke auditioned for the role of CTU agent Nina Myers on 24. She won the role on the day that filming began. The wardrobe department didn't have time to fit her, so she had to wear her own outfit for the entire season of filming. In her three seasons with the show, Clarke was featured in a total of 36 episodes. Clarke won a Golden Satellite Award for Best Performance by an Actress in a Supporting Role in a Drama Series for this role. Clarke also lent her voice to 24: The Game, as her 24 character, Nina Myers.

She has guest-starred on House and Life. She played Renée Dwyer, Bella Swan's mother, in Twilight. She accepted a leading role on new TNT series entitled Trust Me, opposite Eric McCormack and Thomas Cavanagh. The series premiered on January 26, 2009 to positive reviews, though it was cancelled after one season due to declining ratings. In 2010, Clarke reprised her role as Renée Dwyer in Eclipse, the third movie in the Twilight series.

1 of 5
Add photo
Retrieved from "https://the-tomorrow-people.fandom.com/wiki/Sarah_Clarke?oldid=9338"
Community content is available under CC-BY-SA unless otherwise noted.