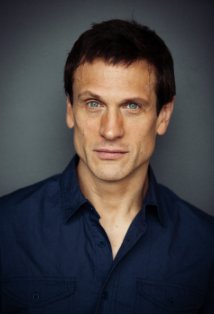 Simon Merrells (born 1966) is an English actor best known for his portrayal of Marcus Licinius Crassus in Spartacus: War of the Damned. He is also a stage actor. He is the older brother of Jason Merrells.

Merrells appeared with his brother Jason in a production of The Comedy of Errors in 2007, playing twins. Merrells has worked with director Steven Berkoff several times, first in a world tour of the play Coriolanus. In 2009, he played Terry Malloy in On the Waterfront, directed by Berkoff. Variety said that "Compact and bristling with contained energy, Simon Merrells has the right physicality to play Terry but never quite emerges from Brando’s long shadow"; The Independent said he "brings his own brand of studied vulnerability and sullen pride to the part". Merrells performed as Benedict in Much Ado About Nothing at the Liverpool Playhouse in 2007, and starred as Oedipus in another Berkoff production at the same venue in 2011. He was nominated for a Stage Award for Best Actor for that role. Later that year he played detective Philip Marlowe in The Big Sleep; The Stage said he was "charismatic" but "a touch too suave and slick".

He has appeared on television in London's Burning, Family Affairs (as bouncer Conrad Williams), and Merseybeat. In 2010, Merrels portrayed Ben Talbot, brother of Lawrence Talbot in remake of The Wolfman. In 2013, he portrayed the Roman commander Marcus Licinius Crassus in the Starz series Spartacus: War of the Damned. He had to undergo a strict diet and four-week fitness boot camp in preparation for the role, losing 21lbs. Also that year, he portrayed character Mark Vega in the British horror film Judas Ghost.

Merrells was born in London in 1966, two years before his brother Jason. He started drama school, but soon left to work as a minicab driver to fund travelling to Mexico, where he painted. He became involved in fringe theatre in Brighton, where his brother was living, when he returned to England.

Retrieved from "https://the-tomorrow-people.fandom.com/wiki/Simon_Merrells?oldid=9625"
Community content is available under CC-BY-SA unless otherwise noted.