Superhero is the 16th episode of Season One of The Tomorrow People. It aired on March 17th 2014 at 9PM.

Stephen is still walking a fine line with his Ultra partner Hillary, who continues to be suspicious of his loyalties. When the Tomorrow People and Ultra learn that there is a new break-out doing good for humans, they both want her on their side. Meanwhile, Morgan takes a risk and betrays Jedikiah's trust to help the Tomorrow People, but what Jedikiah discovers from Morgan is an even bigger surprise. 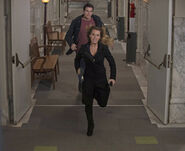 Retrieved from "https://the-tomorrow-people.fandom.com/wiki/Superhero?oldid=14981"
Community content is available under CC-BY-SA unless otherwise noted.