Tomorrow People or Homo Superior are the next evolutionary step in humankind, a generation of humans born with paranormal abilities. The Tomorrow People are being hunted down by the paramilitary organization of scientists known as Ultra, led by Hugh Bathory.

Enemy of My Enemy

Enemy of My Enemy 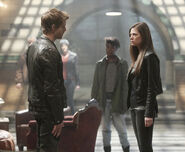